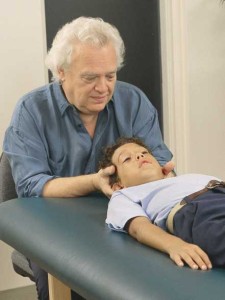 From the producer and director of the multi-award-winning documentariesTwo Spirits and Beautiful Faces comes a fascinating look at one of the most visionary physicians of the last hundred years—a ground-breaking healer who risked ridicule in order to explore a virtually unknown physiological system and its vital role in human health and healing.

From his chance observation of something extraordinary during a 1970 surgery to a legacy of more than a hundred thousand practitioners around the world of what he named craniosacral therapy, Touch is an inspiring film that chronicles a life lived for discovery, challenge, purpose, and profound concern for the health and wellbeing of others.

John Upledger never shied from risk-taking. As a Coast Guard medic in the 1950s, he once single-handedly performed an appendectomy on a ship trapped in the eye of a hurricane, with the help of an onshore surgeon who guided him by radio—a life-changing experience, Upledger later explained, that led him to become a physician.

While assisting with a spinal operation in 1971, the young osteopath was startled to observe what he described as a slow, pulsating movement within the patient’s spinal meninges. He attempted to hold the membrane still but found that he could not—the pulse was that insistent.

From 1975 to 1983, as a professor and clinical researcher at Michigan State University, Upledger led a team investigating this mysterious pulse—which, theretofore had not been described in medical literature—as well as the notion first expressed in the 1930s by Dr. William Sutherland that the cranial bones of the skull are not entirely fused but, in fact, subtly and rhythmically move as part of an important physiological function.

Upledger ultimately became convinced that both the movement of the cranial bones and the pulsing cerebrospinal fluid contained within the dural membrane that bathes the brain and spinal cord were little understood but nonetheless vital mechanisms, and that anything that blocked the flow of this fluid or the shifting motion of the bones could cause both physical and mental distress. “All these membranes affect brain function,” he wrote, “and when they’re not moving properly, there can be harm.” 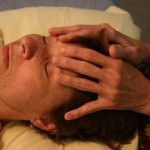 The osteopath’s contentions were laughable, heresy even, as far as most Western physicians and surgeons were concerned. But cranial manipulation had been practiced by the ancient Egyptians and in India for centuries; Eastern medical systems like acupuncture and Ayurveda also long had acknowledged subtle movements that occur throughout the body, caused by the flow of an enigmatic force, sometimes called chi, life-energy, or the breath of life.

In the years following the drubbing Upledger’s claims received from the medical establishment, he might simply have been ignored, except that as he began to experiment with subtle manipulations of patients’ heads and spinal columns, he often achieved astonishingly effective therapeutic results.

“WHAT WE DO IS TAKE AWAY OBSTACLES, LIKE REMOVING STONES FROM THE ROAD.” 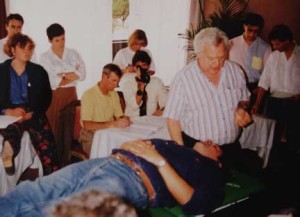 The first patient Dr. Upledger treated with his experimental therapy was a seven-year old boy with chronic and unrelieved pain in his ears; next, he treated a World War II veteran who was desperate to get relief from tinnitus (ringing in his ears) and incapacitating headaches, and both patients soon were pain- and symptom-free. Dr. Upledger treated five-year old and sixteen-year old boys who had autism diagnoses—both were mute, withdrawn, ritualized, and obsessive—and each was pronounced normal by other physicians after only a few sessions with Upledger. And perhaps most astonishingly, the underdeveloped arm and hand of a sixty-eight-year old man with Erb’s Palsy became functional for the first time and even began to grow—something documented by comparative X-rays taken by the man’s family physician—following craniosacral treatment by Upledger.

Over time, the doctor and those whom he began to teach his techniques successfully treated a wide range of medical problems associated with pain and dysfunction, including migraine headaches, chronic neck and back pain, motor-coordination impairments, traumatic brain and spinal cord injuries, scoliosis, learning disabilities, Down’s Syndrome, stress and tension-related problems, and even post-traumatic stress disorder.

In 1985, he established the Upledger Clinic in Palm Beach Gardens, Florida, as well as the companion Upledger Institute, which began to train therapists around the world. Time magazine hailed Upledger as one of the world’s next wave of innovators in alternative medicine, and he was named to the Alternative Medicine Program Advisory Council at the National Institutes of Health. Yet many in the medical community continued to deride him as a charlatan, someone who preyed on the hopes of his chronically ill patients, and were quick to label the therapeutic modality he created as “pseudoscience,” “quackery,” and “just plain silly.”

A HUNDRED THOUSAND PRACTITIONERS AROUND THE WORLD 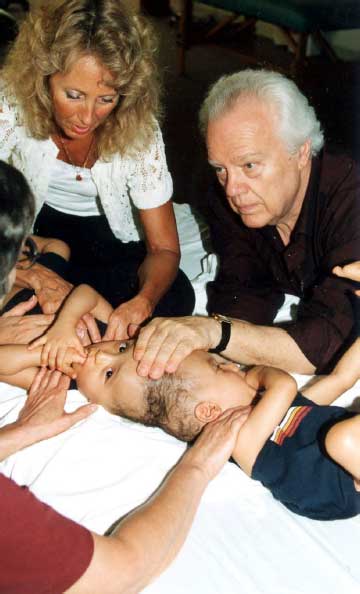 Today, more than 100,000 practitioners of CranioSacral Therapy, CST, located in more than a hundred countries around the globe have been trained by Dr. Upledger and his colleagues. The number of patients benefitting from the therapy he created continues to swell because “he was willing to be scrutinized and criticized and break through established professional boundaries,” according to his son John Matthew Upledger, who now continues his father’s work. “He understood that the techniques he developed could be ably performed by qualified body-workers, physical therapists, dentists, chiropractors, and the many other hands-on healthcare practitioners who serve large numbers of people of all socioeconomic standings.”