Mighty Joe Defies the Odds – by John Upledger, DO, OMM 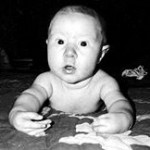 By John Upledger, DO, OMM

By most doctor’s accounts, Joseph Polk shouldn’t be here. He was born on October 15, 1998 with arthrogryposis, an extreme case of congenital joint contractures. His condition had been diagnosed through a level-two ultrasound while he was still in the womb.

Trisomy 18 indicates the presence of an extra chromosome, which creates a condition normally incompatible with life.

Doctors advised Mary and her husband Wally to immediately terminate the pregnancy. They decided to fall back on their faith, a choice they believed had served them well in the prior births of four healthy children. Mary simply refused further prenatal testing.

It turned out the doctors were wrong about much of Joe’s diagnosis. This was just the first of many ways they would underestimate the spirited little boy who became known as Mighty Joe.

Joe Polk at three days old. Arthrogryposis and bilateralclub feet had hardened his limbs and joints.As expected, Joe was born with severely contracted, hardened limbs. “He looked like a pretzel,” Mary said. “His arms were straight and hard. His elbows weren’t discernible. His wrists were bent in full flexion and his fingers were completely crippled. On top of that, his feet were flipped up.”

Fortunately, Joe didn’t have the trisomy 18 doctors had diagnosed, and his other vital signs were all healthy. He cried heartily, sucked strongly and scored high on both Apgar tests. Yet all those positive signs barely softened the blow of the overwhelming obstacles now facing Joe and his family.

“Right away doctors told me his arms were paralyzed and he’d need at least seven surgeries,” Mary said. “They even suggested a drastic move that would fix one arm in a state of flexion so he could feed himself. Then they wanted to permanently place his other arm down to accommodate his toiletry.”

Two leading Chicago specialists confirmed this course of treatment, agreeing it would leave Joe severely handicapped. While both parents agreed to foot surgery for Joe to avoid long-term use of leg braces, they were reluctant to take such radical steps with his arms and hands. That’s when Mary got the idea to pursue another form of therapy she had heard about.

“I had taken a board-certified lactation course before Joe was born,” Mary said. “The instructor mentioned something called CranioSacral Therapy for suck disorders. I had no idea if it would help in Joe’s case, but I read up on it and thought it couldn’t hurt.” So when Joe was five months old, Mary took him to a CranioSacral therapist in their Wisconsin hometown. “After the first session, he started moving his fingers and his arm muscles softened a bit,” Mary said.

At 5-1/2 months, Joe arrived at HealthPlex Clinical Services for intensive CranioSacral Therapy. Previous sessions had already started to soften his tissues.Encouraged, she then brought Joe to see me when I was in their area teaching a symposium. After examining Joe, I told Mary that I felt he would regain full use of his arms and hands. How did Joe’s surgeon react to the news? “He just laughed,” Mary said.

“We did a lot of dural tube mobilization to free up the spinal cord segmentally as well as globally,” Roy said of his sessions with Mighty Joe. “His nerve roots were then able to relax and work more efficiently, which in turn facilitated releases in the contractures in his hips and elbows.

“We also balanced his reticular alarm and autonomic nervous systems to help free up the cranial membranes. And there were significant sessions releasing the maxilla and vomer that helped with Joe’s cranial base, brain stem, and again, his alarm system. Of course, all the work helped facilitate fluid exchange between Joe’s central nervous system and the rest of his body, which did a great deal to increase body efficiency overall.”

At home after treatment at HealthPlex, Joe experienced more flexibility than doctors had ever thought possible.”The change was dramatic,” Mary said. “Joe’s whole body posture and physical appearance changed. His face filled out. He started obtaining more range of motion in his wrist joints and elbows, and he was moving all his fingers.” Back home a week later Joe began bringing his arms and hands to his face to play peekaboo, and he was finally using a sippy cup on his own. “Our whole family celebrated,” Mary said.

Since his first visit, Joe has been to UI HealthPlex once again, and has seen Wisconsin therapists Dodie Corcoran, CMT, and Molly Oakford, PT, for ongoing CST. Mary she said Joe can now feed himself, color with crayons and cut with scissors — and the doctors no longer suggest surgery. 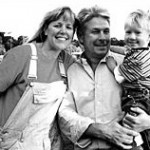 Joe with Mom and Dad in September 2000.Indeed, Joe has already gone far beyond what anyone had predicted. “He’s an incredible little child,” Mary said. “He’s very intelligent with an extensive vocabulary. He’s also loving and kind and very, very sensitive. He’s just a wonderful person.”

Mighty Joe’s biggest strength may well be his will to fight. “Despite all the odds, he’s pulled through,” Mary said. And what lesson has she taken from all this? “No matter what body or mind we are given,” she said, “the soul is precious and vital. You can’t devalue that perfectness in any person, in any living being. That’s what I’ve learned that’s profound.”